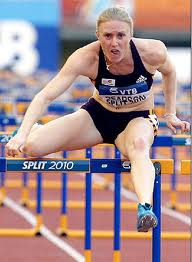 Much gets said about a lot of sports people, including a lot of hyperbole about sports people being “heroes”, but how many of them are truly inspiring people?

Tonight I watched one of my favourite TV programs Q and A, where the debate covered many of the problems that come along with this hero worship. To be honest I was appalled by a lot of the debate and apologist stance put forward by some for the behaviour of some elite sports people.

Then I swapped over to watch the Commonwealth games and had a very stark contrast presented. Several days ago there was a LOT of coverage about the disqualification of Sally Pearson in the womens 100M sprint. During the fall out of that event Sally demonstrated all of the qualities that we really should look for in our role models.

Sally Pearson displayed NO malice towards the officials and other athletes that were involved in her disqualification and spoke to them clearly communicating her understanding that, as devastated as she was about losing the Gold Medal she was OK and it was nothing personal.

Tonight Sally ran in the final of the 100M Hurdles where she came out victorious, claiming the Gold Medal. The TV footage shows her emotional, but then immediately sharing the moment with her competitor who had secured the Bronze medal.

Sally did her lap of honour and then headed in for the media interview. When asked about the circumstances leading up to tonight she said she just had to put it behind her and concentrate on the task at hand. Sally was showing true resilience, passion and persistence.

What truly inspired me however was her absolute awareness of what her position means. She said if as an elite athlete she inspires one child to get out there and get active and healthy she has done her job. She then encouraged all kids to get ou there and participate in Little Athletics, promoting participation in her chosen sport at the junior level.

She then spoke about the importance of her family and looking forward to celebrating with them.

Sally Pearson demonstrated true strength of character, determination, passion and commitment and proved that she can be admired as an elite athlete and as a truly inspiring individual.

There are a lot of elite sports people (and for that matter a lot of people in general) who would do well to get off their pedestal and take a leaf out of Sally’s example.

Who has ever inspired you, like Sally did tonight? Let us know in the comments.