How to be courageous 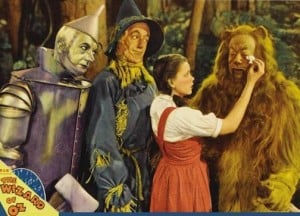 You remember the lion in the Wizard of Oz…… he was in search of courage, because he saw his fear as a weakness, he was timid, BUT he wanted to ROAR…..

The Lion had to go on a long and adventurous trip with Dorothy to meet the Wizard of Oz to ultimately find his courage.

When he meets the Wizard of Oz (depending on which book/movie version you remember) he is given a drink labeled courage, or a medal labeled courage that emboldens him.

Courage is defined as the state or quality of mind or spirit that enables one to face danger, fear or vicissitudes with self possession, confidence and resolution.

Did the Lion possess these things all along without knowing it? Of course he did. If you remember the story there are a lot of things that the Lion does long the way that show courage (even if he is inwardly fearful whilst doing them).

Far too often we see courage disguised in public discourse as bravery. It is spoken of  in terms of those (hopefully) once in a lifetime instances where someone has to face and overcome a life threatening event were someone is required to do something they did not think that they were capable of.

I remember a quote about this from a fire chief  (I can’t find the original source) that said:

“Bravery is a single act often over in seconds, courage is putting on the uniform every day knowing what you may be called upon to do”

Those moments of bravery are what people often mean when they talk about courage, but what  the lion, and most of us, do not understand is that

“Courage doesn’t always roar. Sometimes courage is the quiet voice at the end of the day saying “I will try again tomorrow” (Maryanne Radmacher)

What the Lion ultimately realised is that the courage that the Wizard of Oz gave him was only temporary, and that in reality he had the courage within him all along.

Like the Lion each of us has within us the courage to do what needs to be done (even if doing it scares the living hell out of us). Often it is an element of self doubt that prevents us from exercising our courage and stops us from trying again tomorrow.

So how do you be courageous?

I will let author and publisher William Feather tell you;

“here is the secret of inspiration: Tell yourself that thousands and tens of thousands of people, not very intelligent and certainly no more intelligent than the rest of us, have mastered problems as difficult as those that now baffle you”

and when it is put like that…… do you need to roar, or can you quietly whisper to yourself “I will try again tomorrow”?