Real men can, and should, cry! 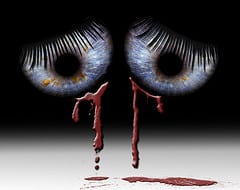 Tears for the World

We took our girls to the psychologist to discuss pending surgery for our son, which carried with it significant risks, including the risk that he may not make it through the surgery. Even if he made it through it was expected that he would be in the Intensive Care Unit for at least ten days if things went well, and if they did not……….

then we would be back where we were three and a half years ago, immediately after Samuel’s accident. We would have decisions to make about turning off life support and then have to watch and wait to see if Samuel was going to live.

As nine and fourteen-year-olds, I am really proud of the maturity that my girls showed in discussing issues of surrounding death, and the issues surrounding dealing with Samuel, theirs and the families circumstances over the past three and a half years.

They also showed a comprehensive understanding of the complexity of the decision that my wife and I had to make to go ahead with the surgery. They really grasped that it was a “rock and hard place” decision.

They understood that not proceeding with the surgery meant that Samuel faced continued deterioration of his health with the ultimate outcome being that he would suffer significantly and that his death would be hastened, and that choosing to proceed meant possibly losing him during surgery, dealing with post-operative complications associated with his fragile bones and failing lung health. They explained in their own words that this was really the only choice to provide Samuel with a chance at a better quality of life.

Samuel has shown that he is one strong little man, he has battled so much since his accident and I am constantly amazed at his strength and tenacity. The girls also showed a great deal of compassion and understanding about what Samuel has suffered through.

I know that the girls have also suffered because Samuel has been in and out of the hospital so much and his illnesses have limited what they have been able to do. They have suffered and sacrificed more than I care to think about.

There are many reasons to be proud of your children. But they made me immensely proud and brought me to tears.

No-one can ever really be prepared for the possibility of their child, or brother etc dying at such a young age, but they showed they are prepared as it is possible to be, they were able to explain themselves articulately and with a grace far beyond what could or should be expected of them at their ages. They demonstrated amazing compassion and proved to me that they really are amazing kids.

I love them and wish that they never had to think about issues like this!

My children can reduce me to tears, and I reckon real men can, and should, cry! How could you not with such beautiful children?

What makes you or your man cry? Do you think real men can, and should cry?