Trying to build your reputation, or your character? 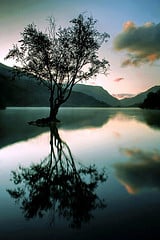 It seems that a number of things appear as “universal truths”… how do you identify them?

By the fact that they keep showing up in different guises, repeated by different people at different times in history, but always with a core component no matter what individual spin is placed on the message.

One of these that has been crossing my mind lately has been….

A few famous people have made comments about this topic including famous US president Abraham Lincoln who said;

“Character is like a tree and reputation like a shadow. The shadow is what we think of it; the tree the real thing“

This is an appropriate analogy because a shadow shifts over time (just think of the daily cycle that the shadow goes through as the day progresses), the same can be said for all of us, what people think of us can change from time to time depending on what light is shining on us, and which way it casts the shadow, and where they are standing in relation to the source of the light.

The tree however has put down roots, it goes through the daily cycle of shifting light, it goes through the seasons, growing, dropping it’s leaves, dealing with rain, hail and shine. It bends  back and forth only so far in a gentle breeze, but resists against strong wind. The tree is what it is, regardless of the light being shone on it.

Same message, but from a different perspective, but if you know anything about the history of Coach Wooden…. he helped build a lot of character into people, and by doing so earned himself an unenviable reputation. If you want to see him in action then take a look at this TED talk.

How do you define character?

There are probably a thousand different ways that people would describe character.

James D Miles said “you can easily judge the character of a man by how he treats those who can do nothing for him” and another unknown source said “everyone tries to define this thing called Character. It’s not hard. Character is doing what is right when nobody’s looking“

How do you build character?

Watch you thoughts, for they become words.

Watch your words, for they become actions.

Watch your actions, for they become habits.

Watch your habits, for they become character.

Watch your character, for it becomes your destiny.

Where are you focusing?

Are you focusing on trying to build a reputation as something? or are you focused on doing what is right, and doing it regardless of whether anyone is watching? Are you laying down roots, or trying to cast the “right” shadow?

You might be able to adjust the lighting conditions to influence the appearance of the shadow, but you can’t hide the tree!