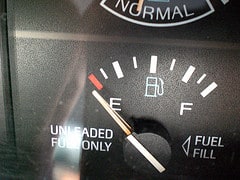 Running on empty – Jackson Brownes lyrics said it all…

I had been running around shuttling the family from one place to another and  finally got around to heading home to pack the car and take the family away for the weekend to unwind.

All was going great until I got about 5 km’s away from home and then the car STOPPED…………The fuel gauge in this picture is what I was confronted by……EMPTY!

After a long walk to and from the service station to get more fuel, and then taking quite a while for the fuel pump to decide that it wanted to actually re-prime and pump enough fuel to start the car we finally headed off for our weekend….. a couple of hours later than we should have. Needless to say we got to our destination VERY late and the first night was a write off.

The fuel gauge as a metaphor

That day was not an atypical day for my family… running around from appointment to appointment, trying to maintain being on time and looking forward to the next thing on the agenda wondering how/when we are going to get there.

On the way home I looked at the fuel gauge and thought… yep that will be enough to get us home and around to purchase some fuel… WRONG!

Over the days following my embarrassing episode of running out of fuel I really started to think about that fuel gauge as a metaphor for life.

Cars are built with fuel gauges so we can see how much is left in the tank, in fact most even modernish cars have a warning light and/or buzzer that tells you that you are getting low on fuel.

You and I on the other hand are not built with a gauge… and we have to try and look at our physical, mental, emotional and social fuel tanks and try and monitor them all at once.

How often have you been running around, getting from appointment to appointment, looking at yourself and thinking, “yeah, I’ll just keep going at this pace until…..”  What is that until?

Until your physical, mental, emotional and social fuel tanks fuel tanks are empty and you breakdown on the side of your desk, you are worn out and you haven’t seen your family or friends in how long?

Even though we aren’t built with gauges to flash or buzz at us when our tanks are getting low there are often warnings signs that your levels are being depleted…..

Some of us are better at seeing and paying attention to those warning signs than others….. let’s help out a few others by listing what your warning signs are in the comments….