The Goldilocks story of your true value 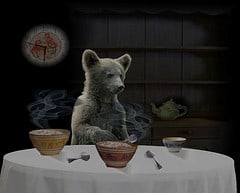 Who’s been eating my porridge

In the last post, we were encouraged to think about our how we occupy spaces in our lives and how much value we are really adding in those spaces, here we are going to expand on that post.

One of the things that are truly inspiring is the quality of many of the comments about posts. The reason I am expanding on that last post is because of such comments.

I was asked an inspired question about whether we under or over-estimate our value? Someone else expanded on a space that I had not mentioned (and honestly did not consider when writing that post), that is our own space.

Both of these are really important aspects……..they go together and in thinking about them it brought to mind a very familiar story, so here we go back to childhood stories to expand on the concept.

We all know the story of Goldilocks and three bears, where everything was either too much of something, not enough of something or JUST RIGHT! Well, the question of our personal space and our value can be just like that story.

Someone made this comment “Ever notice how some people, when they’re not in a good place, take up a smaller space, both verbally and spatially? And when things are flowing, dynamic and good, we somehow take up more space, hopefully adding more value, be it intellectually, spiritually or energetically.” She also spoke about our own spaces intersecting with others.

Whether we are in a good place or a bad place has a direct correlation to our own perceived value.

Let’s start with those with “Papa Bear” syndrome… They are TOO hot, TOO hard, TOO much of just about everything! We all know at least one person who is like this….over-confident.. did I say overconfident. I meant ARROGANT. They always have an opinion on everything, they are always right, they always have a definite answer to every problem. These people clearly OVER estimate their own value, and they occupy a lot of space physically and verbally. When these people interact with the space of others, it is often in displacement mode, they must maintain their own sense of space and superiority and this comes at the expense of other peoples space. They will talk over, and/or down to others.

What about those with “Mamma Bear” syndrome….. they are just the opposite TOO cold, TOO soft, never quite enough of anything. These people tend to be very shy and timid, they are reluctant to voice any opinion, they often think that their opinion is wrong or nobody wants to hear from them. These people UNDER estimate their value, and consequently occupy a very small space physically and verbally. In fact, the space that these people occupy is very fluid, because they always try to fit into the gaps of space that are leftover from everyone else.

Of course, you know the next syndrome… “Baby Bear”….they are JUST RIGHT. They know when to speak up, they know when to keep quiet, they listen to others and they add their opinion as just that…their opinion.. not a FACT or an “I know this probably isn’t worth much…” these people don’t occupy A LOT of personal space, they don’t shift moment by moment the amount of space they occupy to fit in the gaps. They occupy just the right amount space because that just is the space they occupy, but the edges of their space remain a little bit blurry to effectively interact with the space of people with Mamma Bear or Pappa Bear syndrome, they flex a little to resist the Pappa Bears, and they expand a little to support the Mamma Bears… their space both physically and verbally is just right.

Those with “Baby Bear” syndrome…. which is probably the wrong nomenclature because “syndrome” implies a deficit of some sort……so lets it call it “Just Rightness”… have probably been through, and continue to go through a thinking process like the one we talked about in this post about what do you see, believe and do.

Which one are you?

So are you a Pappa Bear, a Mamma Bear, or are you just right? What do you think? Let us know in the comments.